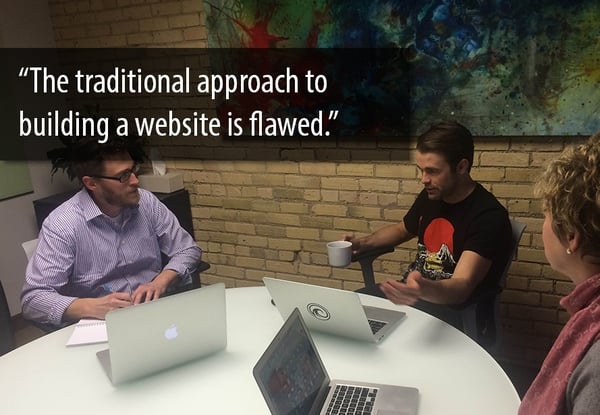 Luke Summerfield of HubSpot describes a website as your number one marketing asset and number one salesperson.

It’s on and working 24/7, 365 days a year, he explained during a visit to the Denamico office.

Why then, he added, should we invest high up-front costs and extended periods of time to produce or redesign a site built solely on assumptions -- “a bunch of little decisions rolled up into one educated guess.”

It doesn't make sense. The risks outweigh the rewards.

“The traditional approach to building a website is flawed,” said Summerfield.

He’s had experience, felt the pain points of the traditional method -- projects were launched late, came in over budget, and were left to sit for a year or two without any impactful improvements.

“The best way to think about a solution is to live in the point of pain,” he said. “That inspired me to figure out a better way to build websites.”

“It’s a smarter approach to web design,” said Summerfield. “I took the best practices from the web development world, the tech software world, and meshed them together with a start-up mentality.”

It was a Blue Ocean Strategy to shift how websites are designed.

Using growth driven design, websites are launched fast, smart, and agile. Decisions for continual improvements are based on user data and other research.

“Growth driven design forces you to pay attention to user interaction using research,” said Summerfield. “Users are the core. It’s a totally different viewpoint to learn from the user.”

Which, can be challenging at first.

The key is to recognize that websites built with the growth driven design model are always considered a work in progress.

Any changes moving forward are driven by asking the right questions at the right time to make informed decisions on the correct method to build out the site.

“If you have a good idea,” said Summerfield, “approach it in a simple way.”

“The entire company is trying to serve the end user,” said Summerfield.

A company’s website, then, should be built and improved upon to continually serve the end user.

Traditionally, we’ve invested too much time up front guessing, he said. Using growth driven design forces you to look through a different lens to achieve higher impact in less time.

The rewards of proactive improvements, he added, of consistent website refreshes based on research versus periodic static redesigns can provide better results, with less risk.

Inbound Marketing for Nonprofits: Is HubSpot’s Model the Right Fit?

How to Win At Marketing According to HubSpot's Latest Research